About the photography
Previous
Next 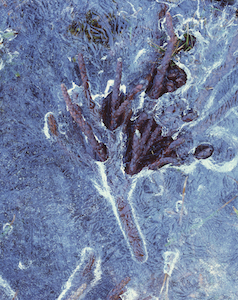 This article originally appeared on The Large Format Blog as part of the "The Photograph Explained" series in 2015
Like many large format photographers, I love detail and the ability large format has to record fine details as part of the wider landscape. In the case of my own photography, it is often these details that have produced the most evocative and personal images of an area I visit.

The Pencil Pine Branchlet is one of a series of macro and closeup images from a trip to the Walls of Jerusalem, part of Tasmania's Central Plateau, in early September 2014. When we initially planned the trip we were hopeful of at least some snow cover. However, an exceptional spell of fine weather throughout August and on into September meant there was scarcely a snowflake left on the whole of the Central Plateau. Bright, cloudless days cast deep shadows, too harsh and with too much contrast for wider landscape shots, while the lack of cloud offered little for photography at sunrise and sunset. The clear nights were still very cold and every morning we were greeted by heavy frost and delicate sheets of ice across many of the tarns and pools which provided alternative subjects to photograph.

This image was taken mid-afternoon amongst a breathtaking stand of mature Pencil Pines (Athrotaxis cupressoides) below Zion Hill where the heavy shade had preserved the remains of the previous nights freeze. Most of the ice was very thin and clear but texture of this particular piece caught my eye. The ice had also begun to melt from around the pencil pine branchlet resulting in a silvery outline.

Having found a potential subject was one thing, photographing it was another all together. The ground around the branchlet was quite soft and every time I moved there was a danger the thin ice might crack. Slow and cautious movements were the order of the day. I spent over half an hour just positioning the tripod and camera, making sure they weren't casting a shadow or being reflected in the ice. I wanted to fill the frame with the Pencil Pine branchlet as much as possible but also balance that with the blueish patterned ice. Even though the ice itself was flat, the limited depth of field presented a a real challenge to get all the branchlet in focus. As so often happens in these situations it was a compromise, with the section closest to lens just beyond the limit of sharp focus. By the time I felt I was ready to expose some film and pulled my head from my dark cloth, I was alarmed to see the edge of the shadow had moved very close to my composition and the ice was beginning to melt visibly. There certainly wasn't time for undue delay.

Often if I photograph in open shade I'll use an 81b or similar filter, particularly if a long exposure is the order of the day. In this case though I really wanted to preserve the contrast of the blue of the ice with the reddish brown Pencil Pine Branchlet so I decided not use any filtration. Film-wise, I was carrying a selection from my ever diminishing stash of Fujichrome Velvia RVP 50 and Provia RDP 100 quickloads, my standards for colour work. With the long exposure and the potential for reciprocity failure, I chose Provia which I find gives better colour accuracy in these situations. I made two exposures of 15 seconds with an aperture of f45. The camera used was a Linhof Technikardan 45 and the lens a Schneider Makro Symmar 120mm.

Shortly after second sheet of film was exposed, the sun finally hit the ice and by the time time I had packed the camera and tripod up, my subject was resting in a shallow pool of water.

At the time I was hopeful of a good photograph but there is always uncertainty; “Was the composition balanced? Did I get the focus right? Had I metered and calculated the bellows compensation correctly?” Shooting film can bring either elation or despair when the film is finally developed.

Thankfully when I picked up the transparencies from the lab, the image, while not without flaws, exceeded my expectation. A photograph such as this was furthest from my mind before our trip to the Walls of Jerusalem but in retrospect, for me, the Pencil Pine Branchlet really does capture the essence both time and place.
Next
Previous